In the Union Budget for 2022-23, Finance Minister Ms Nirmala Sitharaman talked about the virtual currency space. She also mentioned the creation of a Central Bank Digital Currency (CBDC), or the digital rupee, in the financial year 2022-23, in addition to announcing a flat 30% tax on profits from virtual currencies.

Income from the transfer of virtual digital assets, such as Non-Fungible Tokens (NFTs) and cryptocurrency, will now be taxed at a rate of 30% in India. To record transaction details, Ms Sitharaman also suggested a Tax Deduction at Source (TDS) on payments made at the point of transfer of these assets.

What is Digital Rupee?

The Central Bank Digital Currency (CBDC), as the name suggests, will be a digital currency produced by India’s central bank, the Reserve Bank of India (RBI). It will be built on Blockchain and other technologies. Blockchain is a decentralised, immutable ledger that makes it easier to record transactions and manage assets in a business network.

The CBDC will be a digital representation of the Indian rupee. When the RBI begins to circulate the digital rupee, ordinary people will be able to use it just like the regular rupee. The digital rupee may be similar to IMPS, NEFT, or digital wallets. It can also be used for both wholesale and retail transactions.

The launch of a digital rupee based on blockchain will acquaint Indians with virtual currency’s advantages and efficiency. It will pique people’s appetites for crypto, blockchain, and the plethora of innovation and job opportunities that these technologies may provide. The central bank digital currency (CBDC) is also expected to boost the crypto economy while making the rupee a more appealing international currency.

The Digital Rupee, on the other hand, is founded on the notion that once a CBDC is in place, people will stop transacting in private virtual currencies. This may not always be the case. While research on the causes for virtual currency adoption, such as crypto, is still lacking, the benefits of privacy and anonymity are powerful motivators.

Furthermore, these currencies have a higher asset valuation, making them more appealing for investment. For the Digital Rupee, none of this is possible. Although the Digital Rupee’s technological nature may allow anonymous transactions, the Indian government is unlikely to permit privacy by design.

Ms Nirmala Sitharaman had also said in her speech that digital currency would lead to a more efficient and cost-effective currency management system. However, more deliberations should be given to this claim. Because India’s digital payment technology stack is relatively developed, introducing a digital currency at the retail level will not improve efficiency significantly.

Implementing CBDCs on the blockchain would be a bad idea because of the volume and rate of probable transactions. The objective of efficiency would be difficult to attain because computing and validation of transactions over the blockchain are still time-consuming, resource expensive, and demand a significant amount of energy usage. Nonetheless, security considerations must be assessed in the design process, as well as the infrastructure’s resilience to cyber-attacks.

The Digital Rupee’s precise technological design is yet unknown. It’s unclear whether the proposal is being evaluated at the wholesale or retail level. The validation method, whether token-based or account-based, the distribution mechanism, whether issued and distributed directly by the RBI or via banks and the underlying technology, whether the ledger will be distributed or centralised, will all have different ramifications.

However, at the wholesale level, Digital Rupee can minimise settlement risks and speed up settlements in the domestic market, resulting in a much more efficient system. The nations participating in the transaction must have interoperable CBDC infrastructure for global settlements to be efficient.

30% Tax on Income from Digital Assets 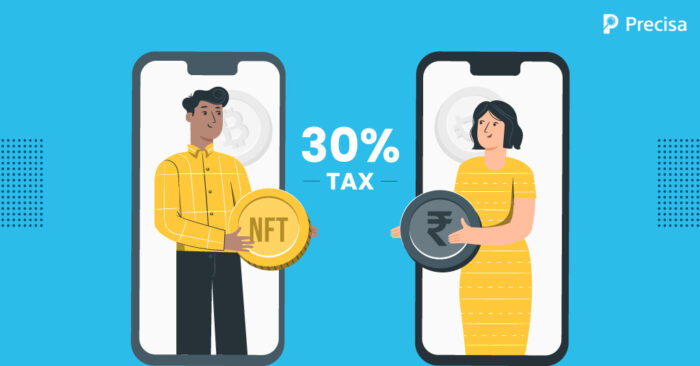 The Finance Minister stated that any income derived from the transfer of any virtual digital asset would be taxed at 30%. There are no allowances for deductions or exemptions. Furthermore, any loss incurred due to the transfer of such assets cannot be credited against other sources of income. There would be a 1% tax deduction at the source for such transactions, and gifts of such assets would be taxed as well.

What does it mean for Cryptocurrency Investors?

This implies that if you hold bitcoins, you will pay a 30% tax rate on your revenues. Any cryptocurrency trading profits, including gifts and transfers of virtual assets from one wallet to another controlled by different people, would be taxed at 30%. Cryptocurrency traders must now record gains and losses that cannot be offset by other income.

With the introduction of the Cryptocurrency and Regulation of Official Digital Asset Currency Bill, 2021, concerns about virtual digital currency transactions being banned in India have been alleviated. The new tax rate, on the other hand, appears to be detrimental to investors’ interests.

Nonetheless, the government’s recognition of cryptocurrency as an alternative investment class to traditional equities is a positive step. Uncertainties and overhangs have dissipated, and the government’s action indicates that cryptos are here to stay.

The Indian government has not yet decided whether to legalise cryptocurrencies. Their position on virtual assets has shifted from a complete ban in 2018 to a reversal of that decision in March 2020. They have, however, maintained their concerns about the use of Bitcoin for money laundering, criminal activities, and tax evasion, among other things.

The government of India appears to be trying to disincentivise the fast-growing markets in cryptocurrencies and NFTs by taxing crypto transactions without directly addressing those issues.

Taxation of these assets, however, does not imply legitimacy. The planned Cryptocurrency Currency Bill, 2021, will clarify the legal status of crypto. However, it does pose some interesting questions. Is recognising cryptocurrency as a taxed asset, for example, implying that Indian banks, both public and private, can now enter and provide financial services to the crypto industry, as they did with gold bonds? Will it dissuade investors from engaging at all, achieving the government’s goal of non-adoption? Or will it simply be a tool for the government to raise tax revenue?

The introduction of the Digital Rupee will be a game-changer for the Indian economy. It will be a significant triumph for digital India and the adoption of blockchain technology, providing new avenues for innovation, monetary efficiency, and a vibrant economy, aside from facilitating efficient and cost-effective currency circulation.

The 30% tax on crypto transaction income is significant, but it is a welcome move in that it recognises and legitimises cryptocurrencies. This is a positive move towards ushering in a new era of innovation in India, which will aid the country’s digital and economic growth.

On the other hand, until RBI releases more information on the design and implementation plan for their Digital Rupee, everything will remain speculative. It will be fascinating to see how they intend to solve the aforementioned gaps, if at all.

Precisa is an online bank statement analysis tool that banks and fintech companies can use to process and analyse potential loan applicants’ bank statements.

Precisa offers good transparency before loan disbursement and may be simply incorporated into your existing system via APIs. To find out more, take advantage of our 14-day free trial.