Is BaaS a Real Threat to Traditional Banks in India?

BaaS, or Banking as a Service, is part of the FinTech revolution that is gripping the world, as well as India. BaaS refers to banking services that operate entirely online. BaaS platforms offer complete end-to-end solutions digitally.

Traditional banks, which have hitherto been used to doing business offline, are now experiencing a crisis of faith.

While BaaS may seem like a threat, it is actually more of an opportunity for traditional banks. If banks play to their strength, they stand a chance to survive and thrive in the coming decades.

How BaaS Might be a Threat to Traditional Banks

Traditional banks operate through thousands of branches. Their customers usually expect to visit these branches in order to conduct any banking activities. These branches have always been an integral part of how banks do business, until now.

Thanks to digital transformation, banking is at a crossroad. Every service that a branch provides can now be done online through digital platforms. There is no inherent need for physical branches to exist anymore. In addition, with the unparalleled speed, efficiency, security, and convenience that technology facilitates, traditional banks have no chance to compete on these aspects unless they step up their game.

Hence, BaaS threatens the very core idea of banks. Banks that fail to adapt to the changing times may well end up losing market share and be rendered obsolete in a decade or so.

However, there are ways in which banking as a service can serve as an opportunity instead of a threat.

Four Ways in which Traditional Banks can Leverage BaaS 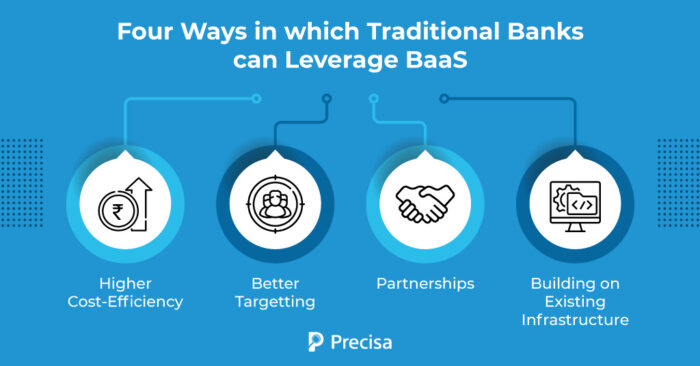 Here are some of the main advantages that banks have over emerging fintech start-ups when it comes to the BaaS business model:

Traditional banks have always struggled to be more cost-efficient. The small margin between savings account interest rates and lending interest rates stands for the entire cost of all operations that a bank needs to perform.

By adopting new technology, banks can automate large swaths of their lending operation. This includes reaching out to potential borrowers, underwriting loans, as well as the collection of payments.

All of this can be completely automated with minimal oversight, thanks to existing software.

This higher cost-efficiency can help banks grow their operations and explore newer horizons. For example, digital lending is already becoming a big part of banking. The technology to make all this possible is already here. Now, the hard part is integrating that technology into the way traditional banks do business.

While this may seem like a complete overhaul and could change the identity of a bank from its very core, the potential benefits far outweigh the sacrifices that a bank might have to make in order to adopt BaaS technology.

Thanks to greater automation, banks can now have the bandwidth and the scale to be able to tap the entire financial ecosystem of India. Imagine being able to provide a credit card to every person in India.

Due to digitisation, the cost of providing these services can be reduced to such a level that banks can afford to cater to a lower-ticket clientele and do it at a large enough scale to be able to experience high margins.

This will not only help the bank’s bottom line but also help the Indian economy move from a largely unorganised and disoriented banking system to a highly organised one.

Banks can also tailor their offerings according to the demographic that they are targeting. With the help of the RBI, banks can offer different types of products to suit the needs of various kinds of customers.

To a traditional bank that has always done things a certain way, adapting to the “new normal” can seem daunting. If a bank is unsure of how to handle the transition on its own, a great way forward is to partner with existing fintech companies that have the technological know-how as well as experience.

Such partnerships are becoming increasingly common around the globe. These partnerships create a synergy that helps brands become the first-movers in a hyper-competitive market.

Internet banking has been around for a long time. It has been a couple of decades since the first of the large banks began offering their services online. This means that most traditional banks already have “some” of the infrastructure that they need to put in place in order to become a wholly digitised operation. Banks already have mobile apps through which they are reaching their customers, and customers have already got used to online banking.

Now, the only concern is how to expand on what already exists along with the digitisation of the bank’s internal processes.

Over the long run, this initial investment can pay off in spades, and traditional banks can completely rebrand themselves as being digital-first and market themselves to younger generations.

As is evident, banking as a service will create more opportunities for banks rather than limiting their scope. Now, it is up to traditional banks to be proactive and take advantage of emerging technology. Either banks adapt to changing times or feel the threat of diminishing market capitalisation and limited growth opportunities.

Here are some of the ways in which emerging technology like machine learning and artificial intelligence are transforming banking.

We, at Precisa, are in the business of helping banks digitise their operations, and we offer automated tools that help you analyse bank statements as part of the lending process. Get in touch with us to learn more about our services.